A storey can be told by any documentarian. Thing A occurs, which leads to events B and C, with the end result being D. That can be enough when the storey is good. You learn something, and your horizons may be broadened—that is a solid accomplishment in and of itself. The filmmaker who goes beyond entertainment and education by using the storey as a springboard for bigger, messier questions creates something far more than entertainment and education. 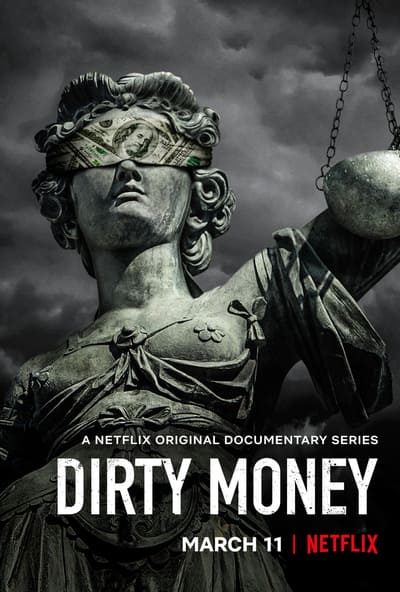 The artist in this case leaves the ends untied, allowing the viewer to ponder their own questions. Those questions may linger, and the world may begin to look a little different as a result. All of this, plus a good storey.

“Dirty Money” contains six good stories as well as a lot of big, messy questions. Netflix’s investigative documentary series spins out stories of financial corruption and decay, the latest from Alex Gibney (“Going Clear: Scientology and the Prison of Belief”).

That description may give the impression that the series is meant to elicit both righteous rage and sour resignation, and that is correct. It is capable of doing both of these things, and will most likely do so. But that’s only half the storey. Jesse Moss, Erin Lee Carr, Kristi Jacobson, Brian McGinn, and Fisher Stevens, along with Gibney’s five co-directors, have created something that is far from bleak.

“Dirty Money” is eminently watchable, somehow counterbalancing the seriousness of the subject matter with a sense of urgency and a keen sense of how to keep things entertaining. These six pieces, like Gibney’s “Going Clear,” combine engaging personalities, bizarre facts, and the aforementioned big, messy questions to keep audiences engrossed in the dense, often troubling subject matter.

Gibney’s film is the first, and it’s a strong start. From the start, “Hard Nox” is framed as a somewhat personal affair, as Gibney begins his narration with the words, “I thought I had found the perfect car.”

It’s a great place to start the series because, while each of these stories has far-reaching implications, many of the characters on screen are personally affected. Gibney and his wife believe Volkswagen lied to them and exploited them by marketing an environmentally friendly vehicle to the public while using “defeat devices” to hide the fact that the cars’ emissions were up to 400 times the legal limit.

The regulators who were duped by Volkswagen have a strong sense of betrayal; a VW executive is enraged by his peers’ deception, but still helps to cover up the mess.

It’s a storey that affects millions (not to mention the entire planet), but it’s also about these people, and that’s something that all six episodes have in common. It’s crucial to the success of Jesse Moss’ second instalment, “Payday,” which follows Scott Tucker, a payday loan tycoon whose elite racing cars are seized by the government as the episode opens.

Tucker is the kind of character who could be painted as almost cartoonishly evil, making money off the desperation of low-income families. Moss isn’t afraid to admit it, but he’s more interested in how Tucker deals with his own wrongdoing.

Tucker is given plenty of opportunity to speak, and his favourite topic appears to be the various ways in which he has been victimised. Moss’s careful framing helps to highlight Tucker’s hypocrisy, lingering frequently on a graceful chandelier or an expensive grill, but his isn’t a cruel point of view. Tucker appears to be perfectly capable of doing so without the need for the camera to condemn him.

Unlike Tucker, the villains in Erin Lee Carr’s “Drug Short” only appear in news footage—a CNBC clip here, a snippet of a Senate hearing there—but they are no less powerful. “Drug Short,” the best film in the series, follows Valeant Pharmaceuticals and its CEO, Michael Pearson, as well as the reporters and short sellers who discovered the company was built on sand.

Carr moves the storey forward in unexpected ways, sometimes asking a question and then letting the audience figure it out for themselves—one such instance, in which she inquires as to why a subject has requested anonymity, is particularly effective.

But even at its most basic level, “Drug Short” exemplifies what “Dirty Money” does best: it highlights the wrongs that have been committed while also demonstrating how difficult, if not impossible, it is to correct them.

More or less, each instalment accomplishes that goal. They aren’t all gems—the final hour, “The Confidence Man,” suffers a little since the current president’s ethical bankruptcy has already been well-documented—but none of them are duds.

At the very least, the series allows viewers to see comparable storylines from six different directors, and while there is a sense of thematic and artistic coherence, “Dirty Money” also gives each director plenty of leeway to express themselves. The end result is a showcase for six talented directors, and while the series offered me plenty of reasons to be pessimistic about the country’s future, it also gave me reason to be enthusiastic about documentary television’s future. Although our country’s ethical coffers are depleted, the glass is half full when it comes to filmmaking.